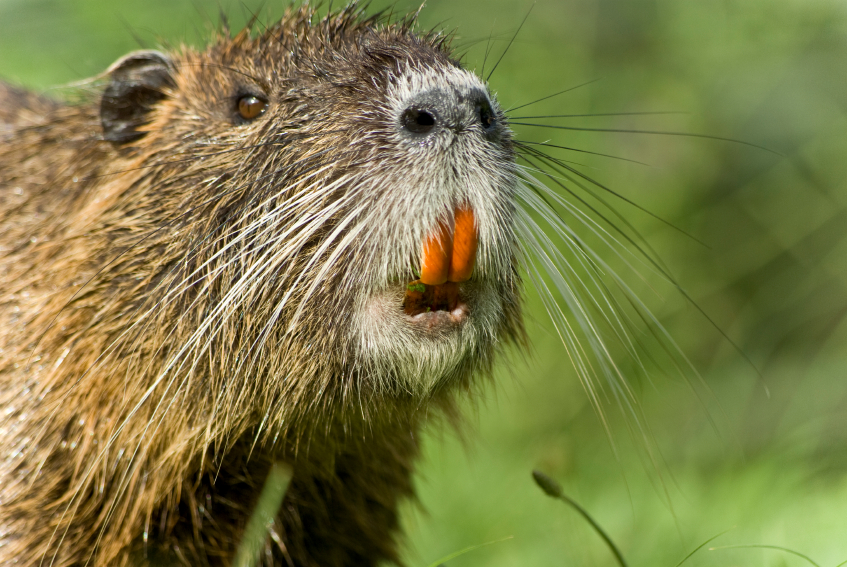 What is a Nutria, and is Nutria removal necessary?

Nutria are pests that need to be removed quickly before they dig deep burrows into your property which can lead to structural damage and flooding of your home. Here’s what you need to know about nutria removal so you don’t have to worry about these pests anymore!

The Nutria, also known as coypu or swamp rats, are large rodents that live in areas with lots of fresh water. They were introduced into the United States during the 1930s, but only in certain states. Now, this invasive animal has spread across most of the country and can be found as far north as Michigan.

Nutria is now considered a nuisance in the U.S. and other parts of the world where their populations have grown, and their presence has disrupted the native ecosystem.

There are three subspecies of nutria: Black, White, and Gray-Brown with colors varying depending on their habitat. They are capable of causing significant damage to crops, wetlands, levees, and other shorelines by burrowing holes up to 2 feet deep through the soil for feeding purposes.

The population has been estimated at 20 million which is more than 10 times what they were before Hurricane Katrina devastated coastal Louisiana with flooding in 2005.

Nutria has a voracious appetite for wetland plants and will chow down an entire plant — roots, bark and all. The furry rodents will occasionally eat small invertebrates such as insects and snails, according to FWS. But nutria isn’t considered picky eaters as they’re often caught eating crops such as rice, sugarcane and corn.

Why Nutria is a Problem Pest

According to Columbia University, Nutria is native to the marshes and coastal lakes of Bolivia and Southern Brazil. The seasonal drought-flood cycles keep their populations in check in those areas. Drought decimates their population, but because of their rapid reproduction rate, the nutria can recover during the flooding season.

Fur traders brought nutria to the United States in the 1800s so that the animals could be easily harvested for their thick and soft undercoat of fur. However, when the fur trade collapsed in the mid-to-late 1900s, many nutria farmers were unable to keep their animals and had to release them into the wild.

The nutria not only survived but thrived in their new surroundings. According to the FWS, nutria populations can now be found throughout the United States, primarily in coastal states. According to the Global Invasive Species Database, they are also an invasive species in Europe, Asia, and Africa as a result of fur-farm escapees.

Nutria is now regarded as one of the most environmentally damaging invasive species on the planet.

Nutria consume roughly 25% of their total weight in plants and roots each day, wreaking devastation on the original ecosystem. According to National Geographic, vegetation is less likely to come again since the animals devour the entire plant. The absence of root systems leads the soil around the water to become unstable, causing it to erode quickly and become open water.

According to the U.S. Department of Agriculture’s Wildlife Damage Management extension, nutria’s burrowing behaviors also cause damage to flood-control levees that protect low-lying areas and water-retaining levees used in agriculture.

Their activities have the potential to cause such substantial damage that the levees will need to be entirely rebuilt. The destructive critters also burrow into the flotation supports beneath boat docks and wharves, as well as building foundations, roads, streams, and dams, weakening and collapsing the infrastructure.

As previously stated, nutria will eat a variety of agricultural products, including rice, corn, wheat, and others. They’ve also been known to eat freshly planted grass and home food gardens, which is why they are incredibly harmful and frustrating for homeowners and farmers.

Invasive nutria is not only harmful to the ecosystem, but they also harbor diseases and parasites such as TB, tapeworm, liver flukes, and nematodes. Drinking or swimming in water contaminated by nutria feces and urine can provide a serious health risk to humans and animals.

The best method to save your property from damage is nutria removal and eradication.

Controlling nutria populations to prevent additional environmental harm is a huge task because they are such a prolific and hardy species. Environmental groups across the United States have tried a variety of strategies, with various degrees of success.

Wildlife Agencies have discovered that removing nutria from their natural habitats is the most successful strategy. To keep nutria from nibbling on wood structures, the agencies propose erecting 3-foot (91-cm) wire fences buried at least 6 inches underground around gardens and lawns, erecting electric wire fences around plants, or erecting sheet metal shields around wood structures.

Agencies and wildlife removal specialists believe that taking a more aggressive stance is preferable. Trapping and/or shooting nutria is the only effective method, although it requires a concerted and prolonged effort.

Maryland, Virginia, and Delaware state agencies have teamed together with the US Department of Agriculture and the US Fish and Wildlife Service to destroy local nutria populations.

According to the US Department of Agriculture, the groups are collaborating with public and private landowners to monitor the creatures’ habitats so that traps can be placed, and the mammals can be humanely euthanized.

If you have a problem with nutria on your property, give our team of wildlife experts a call today!