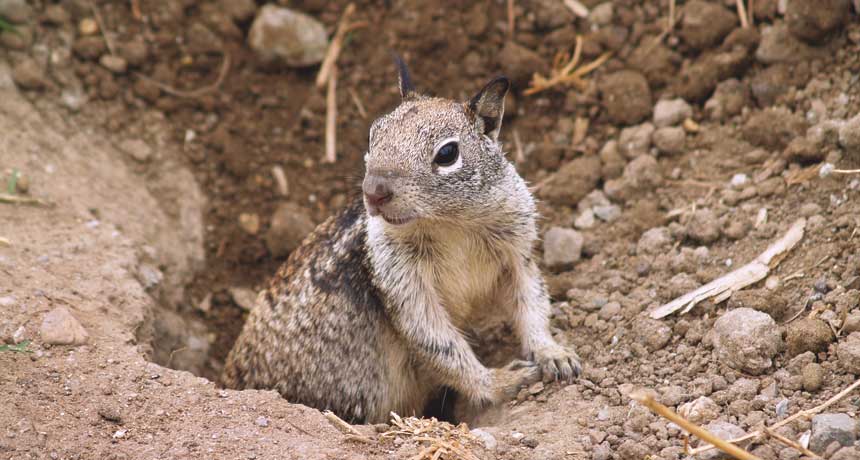 Ground Squirrels are one of the most common nuisance pests in the United States. They are also a major problem for homeowners because they can cause damage to homes, home structures, crops and gardens. Some people elect to get rid of ground squirrels and trap them, while others hire professionals who will try different methods to get rid of ground squirrels for good.

Ground squirrel removal options vary depending on where you live, but lethal traps are often used when other techniques don’t work. If you’re experiencing problems with these rodents it’s important to contact a professional as soon as possible!

Ground Squirrels: Everything You Need to Know

Ground Squirrels are a Nuisance Rodent

It is brown, with 13 alternating brown and white lines and spots on its back and sides, creating rows of spots within dark lines. Its overall length is between 6¾–11⅝ inches.

The California ground squirrel can be found across much of the state, as well as in the northwestern section of the Baja Peninsula. It can also be found in western Nevada and in south-central Washington and western Oregon.

The California ground squirrel has been known to overrun and populate residential areas with open grassy spaces, wreaking significant damage in the process.

Although most California ground squirrel populations flourish in areas with mild winters, there are known populations in the middle Sierra Nevada Mountains at elevations of over 7,000 feet.

California Ground Squirrels are easy to spot because they forage above ground near their burrows. Their body length ranges from 14 to 20 inches, including their tail. Squirrels weigh between 21 and 30 ounces as adults. Males are noticeably larger than females.

The back of a ground squirrel’s fur is mottled brown with some white and gray markings. They feature a mixture of lighter browns, grays, and white on their belly and bottom. Each eye of a California ground squirrel has a white ring around it. Their tails are bushy (but not as much as tree squirrels’), and their ears are upright and noticeable.

Although ground squirrels resemble tree squirrels in appearance and can climb trees, they will normally return to a burrow when threatened, whereas tree squirrels will climb a tree or tall structure and never utilize a burrow.

California ground squirrels sleep, rest, rear young, store food, and avoid danger in colonial burrow systems. Their burrows are approximately 4 inches in diameter, though older burrow openings can be much larger. Burrow systems typically range in length from 5 to 30 feet.

The majority of burrow systems are within 2 to 3 feet of the ground’s surface, but they can occasionally reach a depth of 6 feet or more. Single tunnels or complicated branching networks can be seen in burrows. They might be occupied by a single squirrel or a large group of squirrels.

Most adults slip into a state of inactivity known as estivation during the hottest months of the year, which can last anywhere from a few days to a week or more. The hole seems open at the entrance during these times, but the squirrel fills it with soil around the nest.

Weather, altitude, and latitude all influence the timing of breeding in California ground squirrel populations. Populations at higher altitudes and in colder climates hibernate for longer periods of time and breed later as a result. In warmer climates, mating can begin as early as January and last until July. The months of March to June are the busiest for mating.

Ground squirrels in California only have one litter every year. The normal litter size is 5 to 8, however, litters as small as 1 and as many as 15 have been seen. The young are born in the burrow and grow quickly, emerging from it at around 6 weeks of age. They resemble adults at 6 months of age.

The food of ground squirrels is mostly herbivorous, and it varies depending on the season. They graze nearly exclusively on green grasses and herbaceous plants after emerging from hibernation. Squirrels transition to seeds, grains, and nuts as annual plants begin to dry and generate seed, and they begin to store food.

Many food-bearing and ornamental plants are harmed by ground squirrels. Grains, as well as nut and fruit trees like almond, apple, apricot, avocado, orange, peach, pistachio, prune, and walnut, are particularly vulnerable.

Ground squirrels will devour vegetables in the seedling stage in gardens. By nibbling bark, girdling trunks (totally removing a strip of bark from a tree), eating twigs and leaves, and tunneling around roots, they can do serious damage to young shrubs, vines, and trees. Ground squirrels will gnaw on sprinkler heads, irrigation boxes, and lines made of plastic.

Burrowing has the potential to be highly damaging. Burrows and mounds make it difficult to mow lawns and other grassy areas, and they put machines, pedestrians, and cattle in danger. Burrows surrounding trees and shrubs can cause root damage and drying, which can cause trees to tumble. Burrowing beneath buildings and other structures can result in damage that requires expensive repairs.

When ground squirrel numbers are high, they can carry diseases that are hazardous to people. Bubonic plague, caused by the bacteria Yersinia pestis and spread to humans, pets, and other animals by fleas associated with squirrels, is a major source of worry.

Plague is a disease that has wiped off entire colonies of ground squirrels. Notify public health officials if you notice an unusually large number of squirrels or other rodents dead for no apparent reason. Under these conditions, do not handle deceased squirrels.

How to Get Rid of Ground Squirrels

There are several methods for effective ground squirrel removal. For most homeowners, it is recommended to hire a professional wildlife removal specialist to handle the safe eradication and removal of ground squirrels.

When squirrel populations are low to moderate, traps are an effective management tool. Live-catch traps are the safest but are not commonly advised for DIY use, due to the issue of animal disposal. Live ground squirrels must either be released on the same property where they were caught or euthanized using legal and humane methods.

Ground squirrels can also be killed by a variety of traps, including box traps, tunnel traps, and Conibear traps.

Conibear traps are used to capture and instantly kill species—such as badger, beaver, bobcat, coyote, fisher, lynx, nutria, otter, and raccoon—but they are indiscriminate. This means that pets, endangered species, and other non-target animals, such as dogs and cats are susceptible to harm. NEVER use these traps with pets around.

Nontarget species in the vicinity (i.e. other wildlife) should also be considered during trapping to avoid unintended capture or injury.

Burrow fumigation is a safe way to get rid of ground squirrels. In the spring, or at other periods when soil moisture is high, fumigation is most effective. In the summer or when the earth is dry, do not fumigate since the gas diffuses more readily into small gaps in dry soil, making it less effective. Because the ground squirrel closes its burrow with earth, gases cannot enter the nest chamber during hibernation, do not fumigate.

If you suspect a non-target animal (pets, livestock, other wildlife) is there, don’t treat the burrow. Only active ground squirrel burrows should be fumigated.

Another burrow fumigant that works well as a ground squirrel management strategy is aluminum phosphide. However, only qualified pest management professionals are allowed to use it. It also cannot be used within 100 feet of any structure occupied by humans, pets, or animals, or that may be occupied in the future. As a result, it is no longer used in most residential areas.

For residential application, anticoagulant rodenticides are confined to first-generation active ingredients like diphacinone. These highly toxic products* must be used at tamper-resistant bait stations that are often placed within a certain distance of a manmade building. Specific distances and application rates should be checked on product labels.

Toxic grain baits containing the active ingredient zinc phosphide are only available for use by licensed pest management specialists and cannot be used by homeowners to control ground squirrels. Unless ground squirrels are clearly identified on the label as a target species, rodenticide chemicals licensed for use against rats and house mice should never be used to manage ground squirrels.

Other Techniques to Get rid of ground squirrels

Ground squirrels will not leave their burrows and may avoid an area or crop if there are efficient squirrel-frightening devices or repellents in place. If you are looking for the best way to get rid of ground squirrels, you’ll want to make sure the scaring device is actually working. Ultrasonic tools can ward off squirrels, and there are many people that use them, however, some homeowners have noted an immediate effect at first, but over time the rodent problem will continue to persist once the animal discovers it is no threat.

Injecting ignitable gasses into ground squirrel burrow networks is not suggested for urban use, and it has not been demonstrated to be effective.

Ground squirrels are a constant nuisance. If you’re looking for ground squirrel removal services that will help rid your property of these pests once and for all, give Xceptional’s Wildlife Pros a call today! We specialize in wildlife removal, pest control, and wildlife control. We offer free quotes to anyone who needs our service. Whether it is just one or two pesky critters on your property or an entire colony digging their way through everything they see–we have got you covered with personalized solutions designed to keep them out without harming them (or any other animals!). Contact us or Give us a call today! 877-227-9453

*Pesticides are poisonous! It is advisable for any and all pesticides to be handled by a professional to avoid dangers. Some pesticides are more toxic than others and present higher risks to people, non-target organisms, and the environment. A pesticide is any material (natural, organic, or synthetic) used to control, prevent, kill, suppress, or repel pests. “Pesticide” is a broad term that includes insecticides, herbicides (weed or plant killers), fungicides, rodenticides, miticides (mite control), molluscicides (for snails and slugs), and other materials like growth regulators or antimicrobial products such as bleach and sanitary wipes that kill bacteria.

adminGet Rid of Ground Squirrels: Everything You Need to Know10.06.2021