Xceptional Wildlife Removal experts provide services to get rid of nuisance wildlife and pests.  Boonton Wildlife Removal and Pest Control services are available in Boonton and all other cities of Morris County

New Jersey. We are experts at removing all types of nuisance animals such as birds, bats, snakes, raccoons, squirrels, skunks, opossums, groundhogs, beavers, muskrats, chipmunks, flying squirrels, rats, mice and other nuisance animals of Boonton New Jersey. We are a local company that has been providing Boonton Wildlife Removal services since 1993.

We have been providing New Jersey with complete reliable services to handle wildlife conflicts for over 20 years! We are a one stop shop, we DO NOT subcontract out any of our work, all wildlife removal and damage repairs are performed by our expert wildlife repair team. Our work is guaranteed. Most wildlife removal companies will subcontract out services such as insulation removal and replacement because they do not have the proper equipment. This subcontracting leads to ineffective and/or inferior work done by an inexperienced person that doesn’t have proper Wildlife training or a license by the State of New Jersey to perform nuisance wildlife control services. Don’t trust an insulation company to properly disinfect your attic that has been contaminated with bat guano or animal feces.

Bats often become a nuisance animal within Boonton, NJ. Bats often congregate within homes attics, buildings and other man-made structures. Bats are known to colonize in large colonies upwards of 1,000 bats. If you suspect that you have bats in your attic, contact Xceptional Wildlife Removal for bat removal, guano removal and bat reentry solutions. We offer no obligation in home bat inspections.

There are several types of bats within Boonton that will colonize in buildings and homes attics. These common house bats are the big brown bat and the little brown bat which are both found in this area of Boonton. The photo here is representative of the damage that a bat colony can do if not properly taken care of. The result is usually a very large amount of bat guano buildup below the areas the bats are roosting near. In this example to the left, the bats were roosting in the soffit of a single family home. These bats had been in the attic for an extended period of time causing a large build of bat guano.

Snake removal within the Boonton New Jersey area is another common call received by our office on a daily basis. Snakes often times find their ways into businesses, homes, garages, basements and even attics. Once they are in an attic they are often seen then burrowing holes with the attic insulation. This type of snake problem commonly occurs most often during winter months.

This common type of snake we deal with in this area are black rat snakes, garden variety snakes, and copperheads. Copperheads are commonly found in Boonton NJ. These are very dangerous snakes and you should never be attempted to handle without the proper safety equipment. Give us a call today if you feel you have a copperhead snake in your home or property we will safely remove all types of New Jersey’s snakes! 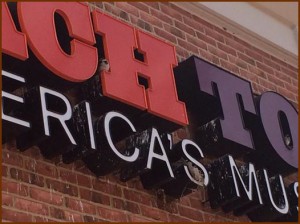 Bird removal within Boonton NJ is also very common call received by our office. Birds often become a nuisance during the spring and early summer months and become a nuisance to businesses and commercial properties by roosting on store fronts such as grocery stores, signs, parking light fixtures and other buildings where people gather such as shopping malls and restaurants.

Squirrels are one of the most common animals seen with Boonton New Jersey areas. They run about power lines, across fence tops, in roadways and are very cute to watch until they chew a hole in the side of your house and run rampant in your attic! Squirrels are one of the most dangerous rodent animals to having in your homes attic because of the constant chewing. They can cause major damage to your homes wires, roof supports, attic fans and gable vents from this constant chewing.

Raccoons are also a common pest animal found in Boonton New Jersey. These cute animals will invade homes, attics, business, and any other man-made structure. Don’t be fooled by their cute, furry appearance. Raccoons are one of the most destructive and aggressive animals that may invade your Boonton, NJ home. Their aggression increases when it comes to protecting their young.  Once a raccoon has gotten into an attic they may destroy wiring, duct work, insulation, attic vent fans and contaminate your attic with animal feces and urine. If you suspect that you have a raccoon living in your attic call today for a no obligation inspection. We have the knowledge and experience to get rid of these pest before than have the opportunity to create serious damage to your home.