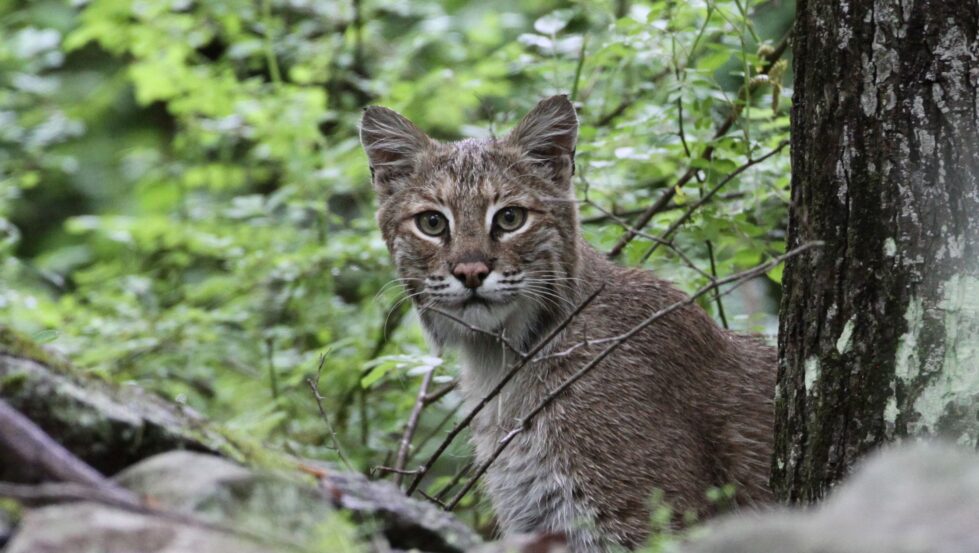 With the increasing population of bobcats in America, many landowners are coming into contact with these large predators. Are bobcats dangerous to us and our pets? And what should we do if a bobcat is on our property?

The bobcat, also known as red lynx and referred to as a ‘wildcat’, is a medium-sized cat native to North America from southern Canada. These carnivores are anywhere from 26 to 41 inches long and can weigh between 11 to 30 lbs. While two times larger than a domestic cat, a bobcat has roughly the same lifespan as the average house cat.

Since bobcats are nocturnal, humans rarely come into contact with them. Bobcats look a lot like little tigers, with spotted bellies, tufted ears, long legs, and large paws. The bobcat also bears its namesake with a characteristic short or ‘bobbed tail’

Have a Bobcat Problem? Give our team a call today! We serve multiple states for bobcat trapping and removal 1-800-929-7163

Where do Bobcats Live?

Although they are rarely seen, bobcats roam throughout much of North America and live and adapt well to such diverse habitats as forests, swamps, deserts, and even suburban areas.

Female bobcats make their dens in caves, rock piles, hollow trees, brush piles, and abandoned beaver lodges. Much like foxes, a Bobcat mother will have several den sites while rearing her kittens and may frequently move them to keep them safe from predators.

According to a survey conducted on Bobcat Population in 2010, Montana, Oregon, Washington, Arizona, Kansas, Nevada, New Mexico and Texas have the highest known population of Bobcats in the United States.

In the 1970’s international laws were put into place to protect Bobcats. Since then, Bobcat populations have been increasing. Today, Bobcat populations are stable and classified as a species of least concern (LC) everywhere except New Jersey and parts of Mexico; where they are listed as endangered. *

What do Bobcats Eat?

Like most cats, bobcats are carnivores and stealthy hunters. Bobcats are ambitious, too, so oftentimes a bobcat will stalk and kill prey much larger than themselves. Typically, a bobcat will eat rabbits, birds, chickens, mice, squirrels, fish, and other smaller game animals. Bobcats are also known to eat deer, reptiles, amphibians, insects, and eggs.

Are Bobcats a Threat?

Will a Bobcat Attack Me?

Bobcats are a rarely seen animal, but that doesn’t mean they aren’t around. They can weigh up to 40 pounds which makes them very dangerous to humans as well as pets.

Bobcats establish and defend a territory and will attack if approached by humans, especially if they are defending young. A highly fatal disease of domestic felines, Cytavxzoonosis, is carried and transmitted by bobcats.

Bobcats are generally pretty shy, solitary creatures. Much like a feral cat, Bobcats will usually run away and rarely attack humans unless they are sick, injured, protecting young, or rabid. If you see a Bobcat in the wild during a hike or outing, it is best to keep your distance, peacefully, just in case her den and kittens are in the vicinity.

How to Get Rid of a Bobcat on My Property

If you spot a Bobcat on your property, it is best to contact your local wildlife removal experts to trap and remove the Bobcats. If you have farm animals, livestock, poultry, or domestic cats and dogs, it will be wise to remove the potential threat to your animals before damage is done.

Professional wildlife removal specialists are trained in trapping and humane removal of wildlife.

How to Avoid the Potential Threat of Bobcats